Animal species in my garden

Not a cricket score but the number of animal species recorded from my garden over the last four years.  It does however remind me of the memorable day ten years ago in November 2010 when as I perused the overnight cricket scores from Australia I came across the remarkable score of England 517 for 1 declared in the first test against Australia. I’d set myself an ambition of reaching a “good cricket score” of 500 species of animal for the garden and it looked like I might reach that by the end of 2020.

How I got this far makes quite an interesting story.  By training I am an Invertebrate Zoologist/Ecologist and worked as some form of Ecologist for various organisations until I retired four years ago and moved to South Uist.  Wherever I’ve lived for the last twenty years or so I’ve run a moth trap in the garden and over that time have seen many changes in abundance of different species.  Some species have become much more widespread, rather more have become much less abundant and there are more subtle changes too.  A number of species have responded to climate warming by squeezing two generations in per year when in the past they could only manage one.

Checking a moth trap in the morning takes a considerable amount of time and when I was working I didn’t really have much chance to look at the other “by-catch” species that were also attracted to the light.  Now, with a bit more time on my hands, I decided to start looking at some of the other animals in the trap and also recording more animal species from the garden generally.  The garden isn’t big.  It covers approximately 700m2 and is a mix of vegetable beds, a couple of small lawns and flower beds, some informal rockeries and quite dense hedges around three sides.

In the first year I concentrated on moths and then started on some of the other invertebrates I was catching in the moth trap and on general sightings of some of the more charismatic, and relatively easily identifiable, groups of insects – butterflies, hoverflies, dragonflies and bumblebees. 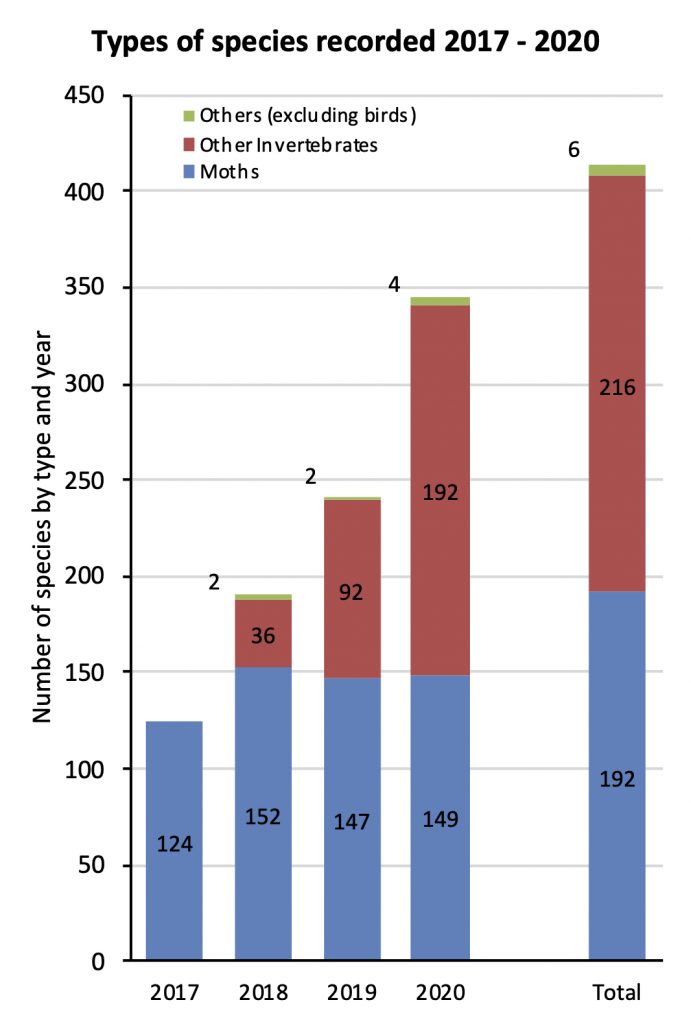 Each year I seem to catch about 150 species of moth in the garden moth trap and by the end of 2020 had found nearly 200 species in the garden.  The moth fauna of the Outer Hebrides is relatively well recorded in comparison to the other groups of insects; the consequence of having a number of long-term residents on the islands who run moth traps.  Most other groups of insects in the past have been recorded by visiting naturalists who may stay for a few weeks, generally in the summer months. As a result these groups are less well recorded in the Outer Hebrides than are the moths. Additionally many are also considered to be difficult groups to become familiar with.

Caddisflies became an early group of more difficult and poorly recorded insects that I started to look at in detail.  These are fairly closely related to moths, are strongly attracted to light and have good identification resources available in the form of a Royal Entomological Society Handbook for the group. I first started identifying these in 2018 and by the end of 2020 had found 24 species.  This may not seem a large number but is about a third of all the species known to occur in the whole of the Outer Hebrides.  My list includes one species Limnephilus pati that was thought to be extinct in Great Britain with the last specimens found in East Anglia in 1915.  At the moment the only known GB location for the species is my back garden!

Next to be sorted were the craneflies.  These were also relatively easy to identify once the appropriate keys had been found.  In this case the keys were unpublished test versions from the Cranefly Recording Group. I started with these in 2019 and had found 16 species by the end of 2020.  It’s not a large number of species but contained some that were not often recorded here including, Erioptera squalida, that has only been recorded three times in Scotland previously.  All those records were from 1977, two from the Edinburgh area and one near Perth. 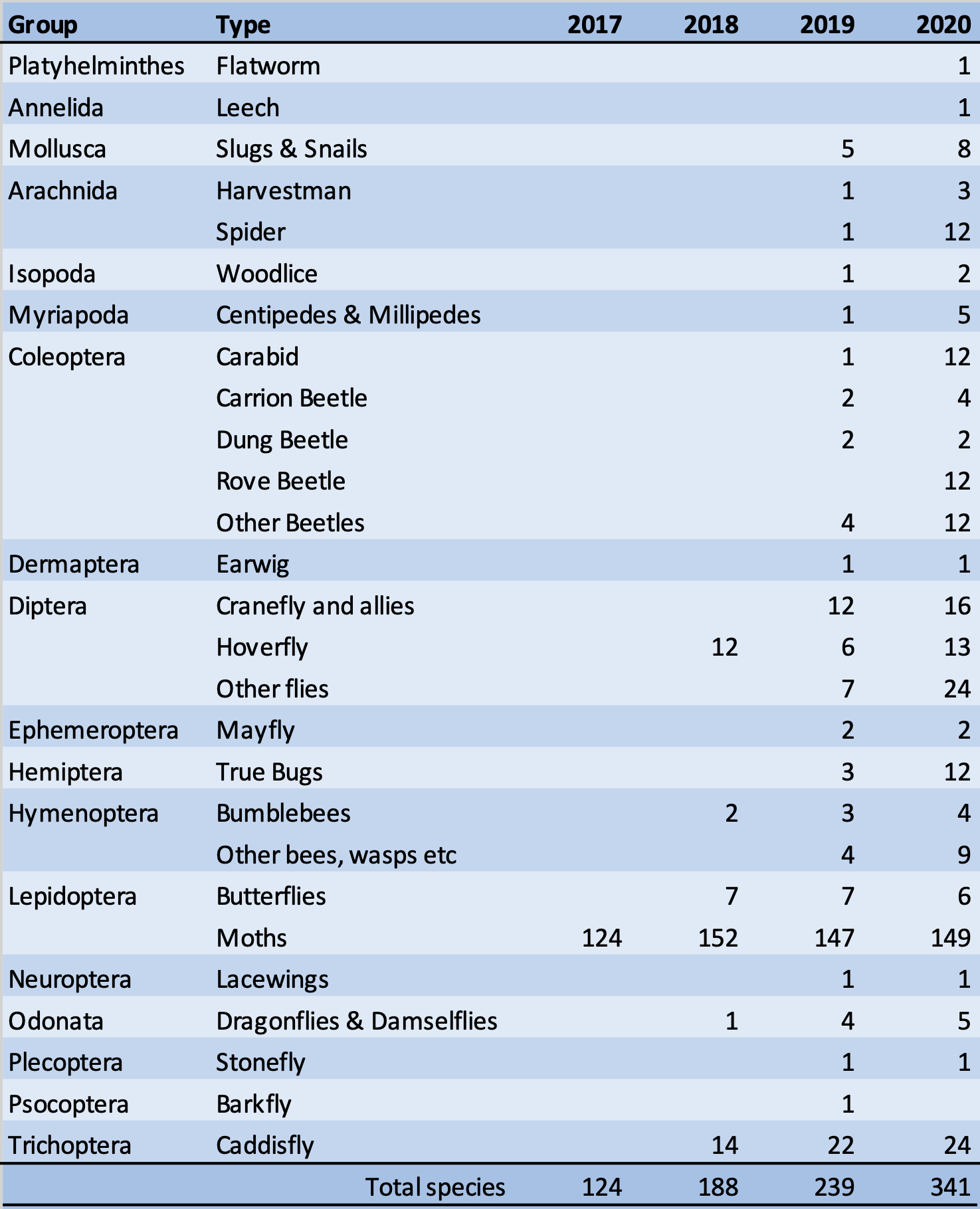 By 2019 I was recording many of the easier “by-catch” species found in the moth trap but was very aware that there were not many beetles (Coleoptera) or true flies (Diptera), other than hoverflies and craneflies, being identified. The reasons were two-fold.  Firstly, moth traps don’t attract many of these species.  Apart from some dung beetles and carrion beetles few are attracted to light and some, such as the Carabids (ground beetles) are reluctant fliers or have lost the ability to fly.  Similarly, whilst some trues flies (craneflies in particular) do seem to be attracted to light most don’t.

The other reason was more to do with my ability to identify them.  There are lots of different sorts of flies. Over 7000 species of Diptera have been recorded in the UK and about 850 of them are known to occur in the Outer Hebrides.  The identification keys for this group of insects are rather more technical, require a higher level of entomological skills and are generally less easy to get hold of and harder to use. There are fewer Beetles.  Just over 4000 in the UK and about 440 in the Outer Hebrides. There are more accessible keys to various groups of beetles than there are for flies but they are still quite technical and need careful microscopic examination of species.

With the onset of “lockdown” in April 2020 I decided that I’d have an incentive to have a go at the Coleoptera. To do this I’d need a better way of finding them.  Whilst light traps don’t work for many beetles, pitfall traps do wonderfully well.  A pitfall trap is a fancy name for a jam-jar sunk into the ground so its neck is flush with the ground surface.  They’re usually covered by a piece of wood, or similar, raised up on three small stones to allow beetles crawling across the ground to fall in.  As well as beetles they also catch millipedes, centipedes, woodlice, spiders and a number of other surface-active species.  I started setting a few traps around the garden in April 2020 and by the end of the year had added a considerable number of new species to the list. I’d gone from 9 species to 42 species of Beetle, found five species of centipedes and millipedes, a number of slugs, snails and spiders and learnt how to identify some groups I’d never really had much confidence in beforehand. 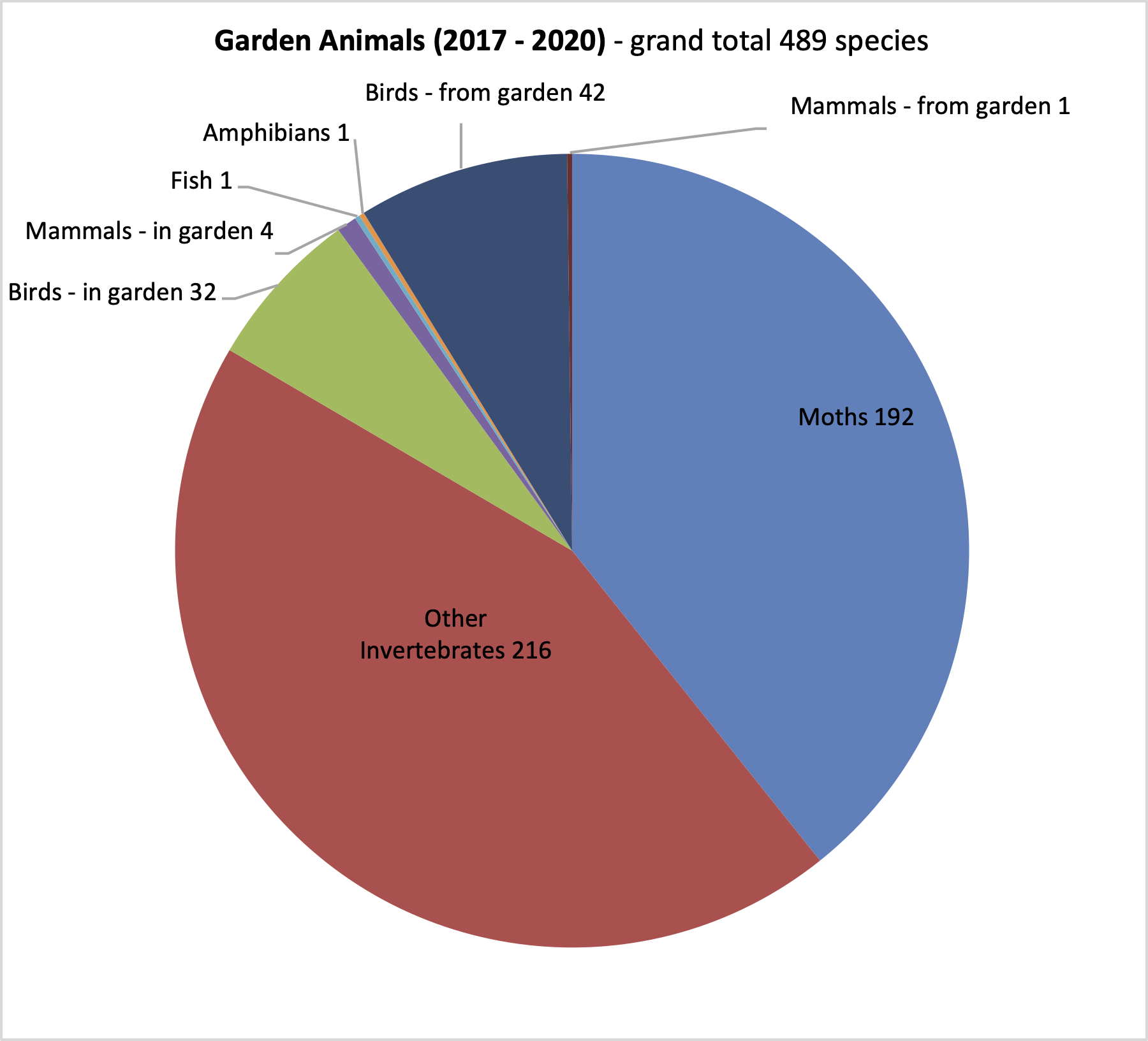 Some extra records of invertebrates came from a small ditch that runs through part of the garden.  It’s only about half a meter long but blocks easily and needs clearing regularly.  Whilst clearing it in 2020 I was able to add a few records of freshwater invertebrates; pond skaters and other aquatic bugs, diving beetles, a leech, a flatworm and a few freshwater molluscs.

The Diptera are a job for next year.  I’d had a go at identifying some of the easier ones found in the moth trap but again I really need a better way of finding them.  This will probably need the use of a malaise trap.  This is basically a flight interception trap, a tent like structure with open ends and a large fabric funnel that directs flies upwards and into a collecting container.

Adding all the invertebrates together at the end of 2020 I found that I’d recorded 408 species for the garden. On top of that I’d also found a common frog and a three-spined stickleback. I’d seen hedgehogs regularly, field voles and pygmy shrews less frequently and spotted the unwelcome but luckily occasional brown rat.  There was also a memorable early morning when I found a large red deer stag looking over the hedge.  It wasn’t in the garden but I suspect it may have been tempted by the vegetable patch.

Gardens don’t have hard borders, they are leaky.  Animals move between the garden and surrounding land. Over the four years I’ve been looking at the animals in my garden I’d seen 32 species of bird actually in the garden and another 42 from the garden.  I know my light trap attracts moths in from outside the garden.  Dragonflies and Butterflies pay no attention to where the boundaries are so I’m happy to include them as garden animals.  Using the same logic, I feel I can add the red deer and birds seen from the garden to my list. So, by the end of 2020 I’d reached 489 species.  Not bad for a small, unremarkable, garden on South Uist.