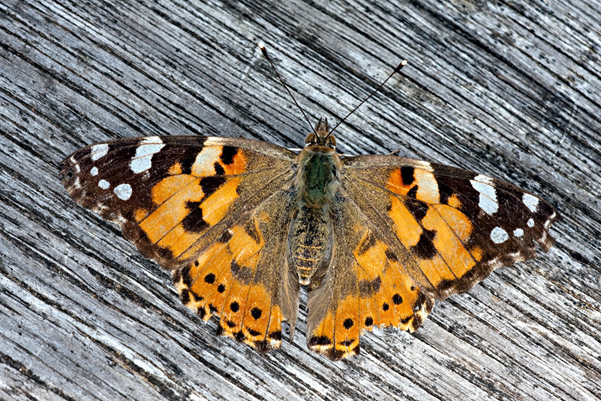 Early sightings of an amazing migrant butterfly from the Outer Hebrides

At this time of year, like many naturalists, I look forward to the signs of spring that inevitably herald the better summer weather yet to come; Oystercatchers and Ringed Plovers returning to their machair breeding sites, the first queen bumblebee foraging for nectar on early flowering daisies in the garden and the first butterflies.

In most years the first butterflies will probably be Small Tortoiseshells emerging from their hibernation in ruined buildings, garages and sheds.  These start to be seen in late March or early April when they are joined by Peacock, Red Admiral and Green-veined White butterflies. This year though to my great surprise it was a Painted Lady seen in my garden at Eochar on South Uist on 27th February.  We don’t usually see the first of these until late May, indeed the earliest record we have for the Outer Hebrides is from the 22nd May.

Painted Lady butterflies are known long distant migrants. The ones that we see here in the summer are the offspring of ones that left their wintering grounds in sub-Saharan Africa in late winter. Those move north and breed in Morocco and their offspring move into Spain and breed and their offspring move north again and after five or six generations may reach the Outer Hebrides in May and June where they breed again.

By the end of August or into September then newly emerged adult Painted Lady butterflies are ready to migrate south again. Radar studies have shown that they fly high (up to 500m) and fast (c.30mph) and can cover an estimated 2500 miles in a single flight.  This would take them well into North Africa where they may breed again and their offspring would cross the Sahara to winter and then the whole process starts again.

Seeing a Painted Lady in the Outer Hebrides in February is remarkable. At this time of year they should still be south of the Sahara or maybe in Morocco. Each year Butterfly Conservation collects sightings of Painted lady butterflies across the UK. A screen shot of their 2019 sightings page for February 2019 shows about 30 records mostly from the western parts of the UK. Most of these sightings were in the period 19th – 27th February.

February was a record-breaking month with the warmest ever February temperatures for Scotland, England and Wales being recorded between the 21st and 26th February. Exactly the same time frame as for the bulk of the sightings of Painted Lady butterflies across the west of the UK. The source of this heat, warm air from the Canary’s carried towards the UK by strong S – SW winds. The Canary Islands lie just of the west coast of Morocco and are known to have Painted Lady butterflies breeding there in February. So it is possible that the butterfly I saw in my garden in late February had blown directly there by warm southerly winds all the way from the Canary Islands or Morocco.

If anybody sees Painted Lady butterflies in the Outer Hebrides then records can be sent to the OHBR or Curracag facebook pages.

Visit the Outer Hebrides Lepidoptera website to discover more about the butterflies and moths of the islands.