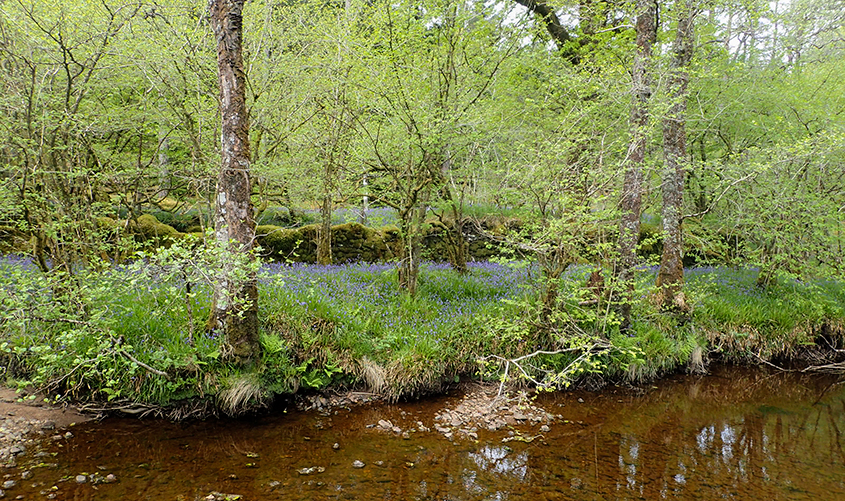 Driving home from a trip to Argyll last week, I was captivated by the extensive blue haze on the hills above Loch Lomond which slowly transformed into masses of bluebells carpeting the woodland floor down to the loch shore. Spectacular displays of bluebells are one of the highlights of the spring; the swathes of bulbs flowering before the woodland canopy or bracken create dense shade.

Traditionally bluebells are associated with broad-leaved trees and are one of the plants that are characteristic of ancient woodland. On bracken-covered, upland slopes their presence may indicate that these areas were once covered with woodland, and the presence of bluebells in the Outer Hebrides may be a relic of a time when woodland was a feature of the Hebridean landscape. However, bluebells will grow in the absence of trees in areas where the habitat is undisturbed and the climate is humid.

The bluebell is known by a host of common names: English bluebell, wild hyacinth, wood bell, bell bottle, cuckoo’s boots, lady’s nightcap, witches’ thimbles, granfer griggles, cra’tae and many more. It is often assumed that in Scotland bluebells are called wild hyacinths and the bluebell refers to a species known in England as the harebell (Campanula rotundifolia). This might not have always been true as both Robert Burns and the poet John Clare used bluebell and wild hyacinth to describe the same flower. The scientific name has been equally capricious, changing from Endymion non-scriptus in the 1980s to Scilla non-scripta and then finally to Hyacinthoides non-scripta in 1991.

The Latin species name was devised by by Linnaeus;  the genus Hyacinthoides means “like a hyacinth” and the species name non-scripta means “unlettered”. In Greek mythology a hyacinth flower sprang up from the spilt blood of Hyacinthus when he was accidentally killed by his lover, the god Apollo. His tears of grief fell on the flower’s petals marking them with the letters ‘AIAI’ (meaning ‘alas’). The term non-scripta was added to distinguish the species from the plant described in the original myth.

In English folklore there are a number of local myths associating bluebells with faery enchantment, but in Scotland the superstitions relate to the belief that it is unlucky to take them indoors. However, in parts of Scotland there are folklore associations between the world of the faery, the devil, witches and harebells. It was believed that the faeries owed Hell an annual tithe of souls and therefore they abducted human children to prevent sacrificing their own kind. This is similar to the stories about children picking bluebells disappearing into the land of faery in English folklore. As bluebells and harebells share many common names, it is possible that their folk traditions have overlapped and intermingled.

Whether you believe in the world of faeries or just enjoy the folklore traditions, it is possible to see why there should be a link between bluebells and enchantment. To stand in a woodland in the early spring in the dappled sunlight and gaze upon a carpet of bluebells is magical.