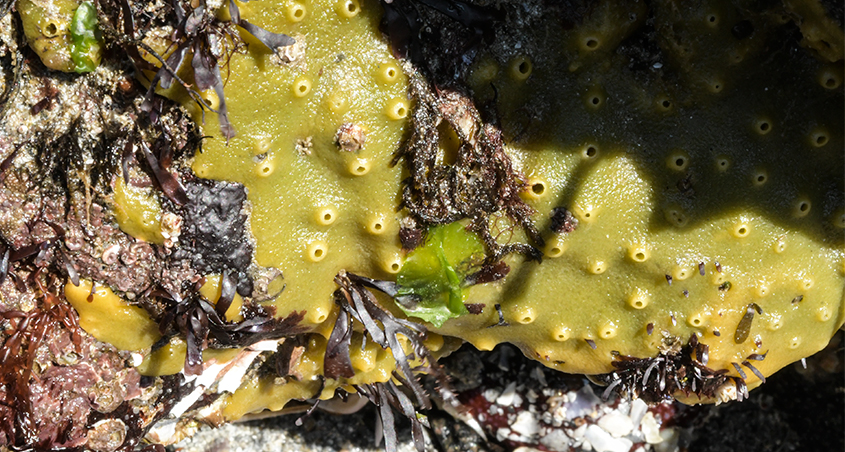 Bank Holidays are traditionally a time for a trip to the beach, and Hebridean beaches can be as quiet as any Robinson Crusoe desert island. However, they are not as empty as they might appear and a closer look will reveal an abundance of life. The animals and seaweeds you find will vary according to the type of beach, sandy, shingle or rocky, whether the beach is exposed to the wind, waves or strong currents and of course the climate. The wildlife will also change as you move up and down the beach, depending on how much time they are covered by the sea as the tides rises and falls.The combination of all these factors will create a range of different environments and so determine which animals and plants are present.

The range of different life forms can be overwhelming and it can be difficult to know where to start. Shall I look at everything, just seaweeds, collect sea shells or look at wriggly things or jelly-like blobs? The choice is endless, but you could start at the bottom of the animal kingdom and look at some of the simpler life forms. One of the best places to start looking is around the rocks and especially in the rock pools. If you carefully lift the skirt of seaweed, you will find a range of animals either clinging to the rocks or attached to the seaweed, hiding from the sharp eyes of predators or just waiting in a cool moist environment for the tide to return.

Our mini beach safari on Easter Bank Holiday Monday, began in spectacular style with an otter; wet and sleek, almost the same colour as the dark bladder wrack, silently and sinuously moving between the rocks. A predatory mammal at top of the food chain, easy to identify, but not to be seen everyday. In contrast there is an enormous and diverse range of invertebrates which are commonly found on the seashore, either attached to the rock or seaweed. Many are either sessile or very slow-moving, so there is time to have a close look before you try to take a photograph.

Sponges are one of the simplest types of marine, multicellular invertebrates, although their cells are specialised for different functions e.g. feeding or reproduction, they are not organised into organs The body is stiffened by small spicules of either calcium carbonate or silica, so that it has a firm texture and a definite shape. In fact a bath sponge is the fibrous skeleton of a tropical sponge. Sponges are filter feeders, water enters the body through small pores and after the organic matter, which is suspended in water, is removed it is expelled through larger pores. There are over 400 different species of sponges living in British coastal waters, but there are some which are commonly found in shallow water and on the upper reaches of the shore.

The breadcrumb sponge is found on rocks in shallow water, often beneath overhanging rocks or in crevices. The sheets of cells can either be thin or thick, and have characteristic raised water outlets which resemble small volcanoes. The colour varies from olive-green to pale yellow, depending on the amount of light it receives – the green colour is due to the presence of algae living symbiotically in the sponge cells. It also has a very characteristic (unpleasant) smell, which will distinguish it from similar species. The purse sponge is also commonly found on the shore, usually attached to seaweed. It has a very different structure, resembling a small flask or purse with a short stem and is usually a pale cream or ivory colour. The water enters through pores in the flask and is expelled through the opening at the mouth of the purse.

When looking at animals attached to seaweed you may find some strange soft gelatinous creatures, these are usually ascidians. They are also sedentary, filter feeds, and although they have a simple structure they belong the group (chordates) which includes the vertebrates. The relationship is not immediately clear, but the larvae of ascidians resemble tadpoles and have a very rudimentary backbone and nerve chord, just like their more complex relatives.

The sea squirts belong to this group. The body of the adult is basically a tube with two siphons, one for sucking in water and one for expelling water after the food particles have been removed by filtration. More complex than the sponges, they have an intestine for digesting the filtered particles and a basic blood circulation system. The larger species are solidary or occur in small groups, but the smaller species are often colonial and in some species their structure has become modified for the communal lifestyle and they no longer resemble their larger tube like relatives. The individual zooids (individual animals which form the communal organism) are held in a gelatinous tunic and are arranged either in rows (e.g. Botrylloides leachii) or in star shapes (e.g. Botryllus schlosser). Each zooid has its own intake siphon, but each group or row shares a common outflow opening.

Both types of ascidians can be found relatively easily by searching among the rocks and seaweeds on the shore or in shallow water.

One thought on “On the Beach”